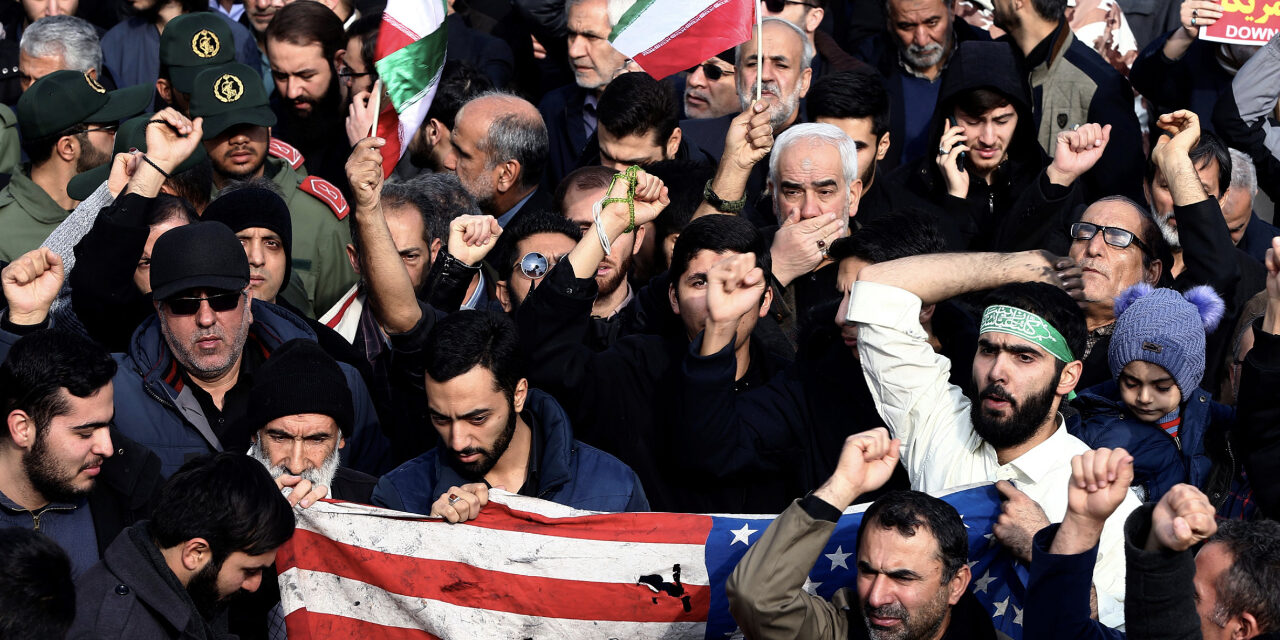 On January 3rd the U.S. executed Iranian general Qassim Suleimani, the head of Iran’s military, and several others, including senior Iraqi militia leader Abu Mahdi al-Muhandis, setting in motion a chain of events that could lead to war. Although tensions eased somewhat after Iran sent multiple signals that they want to de-escalate, the situation could easily reignite. In fact, a weakening U.S. imperialism is increasingly frustrated as it is forced to engage in more and more no-win conflicts (currently: Afghanistan, Iraq, Syria, Yemen, Libya, central Africa, …) The more the U.S. engages, the deeper it sinks into quicksand. The way out is to get the hell out, but U.S. imperialism has a hard time recalling this lesson it was taught in Vietnam.

Failing that, we expect that angry and frustrated U.S. leaders will repeat reckless acts like the Suleimani assassination, in a desperate if senseless attempt to deny the decline of U.S. imperialism, locally and globally. (As we write these lines, U.S. Secretary of State Mike Pompeo has just rejected the Iraqi Parliament and Prime Minister’s demand that the U.S. withdraw all its troops from their country, meaning that American forces are now officially an occupying army.)

Since the 1979 Iranian Revolution, the U.S. has been aggressively hostile to the Iranian regime. The current confrontation is the latest stage of a conflict for hegemony over the entire Middle East between the U.S. and its allies on the one hand, and Iran and its allies on the other. We have few illusions about the Iranian regime, which has in recent weeks killed over a thousand democratic oppositionists and imprisoned and tortured far more. Nor do we have illusions in Suleimani, the number two person in the brutal Iranian theocratic leadership, and the chief enabler of Syria’s genocidal authoritarian leader, Bashar al-Assad. But U.S. propaganda notwithstanding, Suleimani was not killed in the interests of the people of Iran, Iraq, Syria, or the world. He was killed because the U.S. imperialists feared him – because he was responsible for their defeats and frustrations in Syria and Iraq, and for the inability of the U.S.’s Saudi allies to defeat the Iran-allied Houthis in Yemen, despite a staggering firepower advantage.

Suleimani’s assassination is the latest in a long line of coups, murders, and associated bloody acts of terrorism by U.S. imperialism: the 1953 coup to oust Mohammed Mossadegh and install the Shah in Iran; the 1954 coup against the government of Jacobo Arbenz in Guatemala; the 1961 assassination of Patrice Lumumba in the Congo; a series of CIA- coordinated military coups to oust elected governments in Greece, from the 1940s through the 1960s; the 1963 overthrow and execution of Iraqi Prime Minister Abd al-Karim Qasim; the 1965 U.S. Marine invasion of the Dominican Republic to oust the Juan Bosch government; the 1973 murder of Chilean president Salvador Allende; fomenting the Iran-Iraq war (1980-1988), in which approximately one million Iranians died; the Gulf War invasions of Iraq and subsequent virtual destruction of Iraqi society; the bellicose Hillary Clinton “regime change” policy that laid waste to civilization in Libya—to name just a few.

In every case, the U.S. claimed to have intervened to protect democracy and make things better for people. But are the people of those countries better off for the U.S. intervention? To ask the question is to answer it. The goal of U.S. intervention isn’t to make things better for the overwhelming majority. It’s to maintain its global world order, and to protect the assets and the profits of the banks, the energy corporations, the weapons manufacturers, the bond holders. The cops of the world. Like cops everywhere their objective isn’t to protect people, but to protect the haves from the have-nots. And that’s why they killed Lumumba and Allende. And Suleimani. (In fact, the assassination of Suleimani, by rallying much of the nation around its leadership, initially made things worse for Iranian oppositionists. However, mass protests against the regime have resumed in the aftermath of the downing of a passenger plane in Tehran by missiles fired by the Revolutionary Guards, killing all 176 on board, half of them Iranians.)

For decades, maintaining U.S. global control has been a bipartisan policy. It continues to be so. We won’t end the threat of war by appealing to the Democrats. They are as responsible as the Republicans for the sordid history – and present – of U.S. imperialist global policy. They think U.S. has a right to police Afghanistan, Iraq, Syria, … They think murder by drone is perfectly fine. (Obama, the “civilized” president, was responsible for making murder by drone U.S. policy – and for escalating the war in Afghanistan.) The Democrats just prefer that U.S. policy should be carried out more prudently (as do the butchers of the Saudi royal family, who have urged Trump to back off.)

We need to end U.S. imperialist global domination. That requires a clear rejection of the Democrats – including the “insurgent” Democrats, who in the end are there to round up and corral dissent, then channel it back into the system via electoralism and support for a more “rational” U.S. state, at home and abroad. U.S. imperialism will not be disarmed by the Democrats any more than it will be by the Republicans or by the capitalists themselves. It must be disarmed by a mass movement from below.

Based on all of the above:

1. We condemn this murder of Suleimani– the latest in a long line of terrorist acts committed by the U.S. war and “intelligence” machine.

2. We oppose the U.S. belligerent escalation and demand an end to the U.S. economic and political sanctions against Iran.

3. We call for the U.S. to immediately recall all of its forces from the region—from Iraq (as demanded by the Iraqi parliament), from Syria, and the entire region, and to as rapidly as possible bring all U.S. forces home and close all foreign bases.

4. We advocate an independent, militant, mass movement, one which engages in disruptive actions.

5. While unconditionally opposing the U.S. attacks on Iran, we also oppose the repressive, authoritarian Iranian regime, as well as all other imperialisms and authoritarian regimes, regionally and globally (Saudi Arabia; Israel; Iran; Iraq; Syria; Turkey; Russia; China; …) But our focus must be on opposing the aggressive imperialism and world domination of this country, the U.S., the bulwark of reactionaries everywhere and the country with the most murderous military machine in the history of the world. We support popular rebellions in all of these countries, but our focus must be on opposing the global domination of, and ultimately bringing down, the U.S. ruling class and the reorganizing of society, from bottom to top, by the have-nots.

U.S Out of the Middle East!

Down with Both Capitalist Parties!

No Illusions in the Iranian or Iraqi Regimes!

Build a World for People, Not War and Profit!