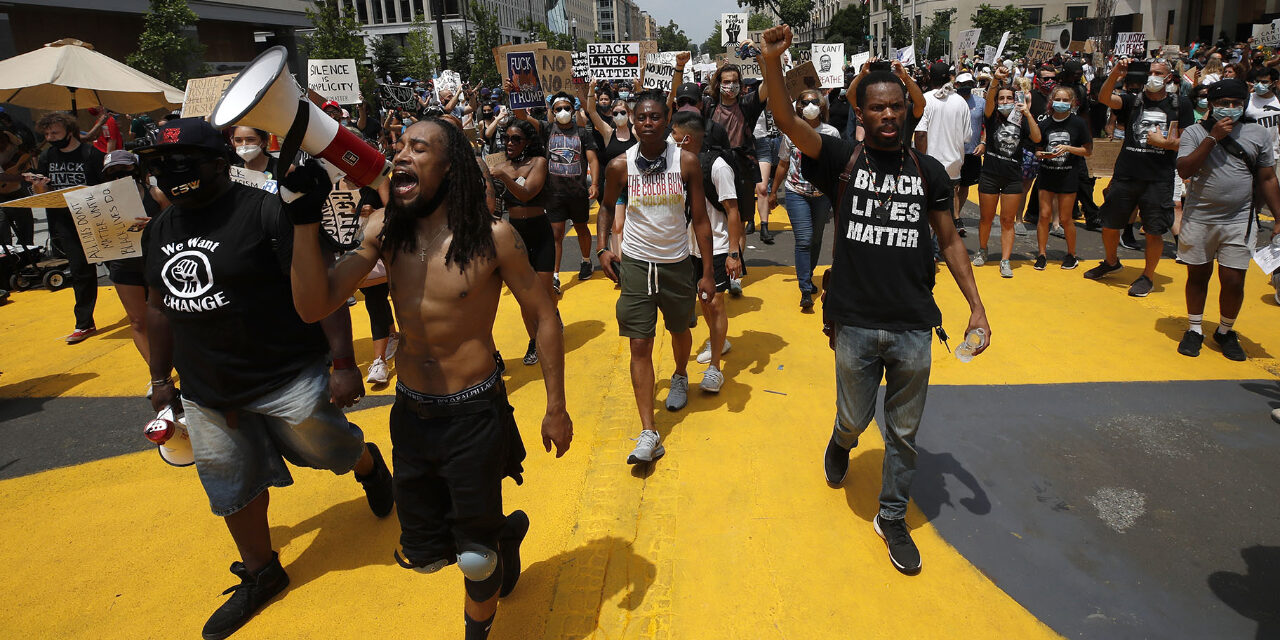 The explosion of rage and sorrow across the cities and towns of the United States is about more than the police murder of George Floyd. It is about the series of Black and Brown people murdered by cops recently and going back to the days of slavery. It is about men and women assaulted by armed police or vigilantes as they sat in their homes, walked or jogged on the street, drove their cars, birdwatched, stood in their building’s vestibule, shopped, or hung around at a street corner. It is both about completely innocent and respectable citizens or people who had committed very minor “crimes” (George Floyd was accused of buying cigarettes with a counterfeit bill) for which they got the death penalty. It is about millions of young men in prison for often trivial offenses such as the ownership of marijuana.

But it was about more than the usual mistreatment by the police, including murder. It was about the whole oppression of African-American people and other people of color. It is now decades after the end of Jim Crow, of racial segregation, which had been enforced by the police and by the extra-legal terror of the Klan. Yet the underlying racism–the knee on the neck–never ended, and the racists in power have renewed attacks on Black people, such as their right to vote (voter suppression).

The terrible pandemic has fallen heavily on Black people, causing many more infections and deaths than in the general (white) population—due to greater poverty and rates of ill-health, plus less available health care. This is true of other people of color. Native Americans have suffered badly; the Navajo Nation has been especially hard hit.

An economic recession (or depression) has been triggered by the pandemic and the methods used to counter it, such as the shutdown of much of the economy. The unemployment rate is higher than in the Great Depression of the 1930s. African-Americans, Latinx, and the Indigenous have been the worst affected by these conditions. “Last hired and first fired,” they have been laid off, losing their incomes and their employer- paid-for insurance. That is, except for the “essential workers” who are disproportionately “minority” and therefore most exposed to the coronavirus.

Adding insult to injury, the U.S. has a president who ran on racist and nativist appeals to the bigotry of sections of the white population. This president has proven to be utterly incompetent and inept in dealing with any of the nation’s crises, but he has continued to direct blame onto Black and Brown people.

The murder of George Floyd by police, out in the open, publicly recorded, with witnesses calling on the police to stop, was a lighted match. The underlying rage of so many burst into flame. No one could justify the actions of the cops, not the establishment politicians, the police unions, nor the right-wing media. Not even President Trump. Millions of ordinary white working class and middle-class people were on the side of the Black population. Demonstrations began immediately and (at the time of writing) have not stopped. They have taken place in at least 140 cities and, overall, nearly 500 localities. The government almost immediately fired all four cops and charged one with murder; it has since expanded the charges to the other three. This is unlike the usual months-long foot- dragging.

The demonstrations have mostly been “peaceful” in the sense of law- abiding, if angry. Many white people have participated. Even some police have shown some support. But there has also been a fringe of violence and lawbreaking, including smashing windows of buildings, looting stores, fighting police, burning police cars, and setting fires to buildings (one police station was burned down). In big cities, there are reports of neighborhood watches being locally organized to prevent “outsiders” from setting off violence and destruction.

There is controversy about who is doing these violent actions (“violent” but almost entirely against things, not people). One claim is that it is done by (or led by) left-wing “antifa” activists and/or anarchists. There is also evidence that right-wing militants, including white supremacists, are mixing in, hoping to set off a “race war” or “boogaloo.” Whether there are many of these fascists is not known. To some extent blaming white “extremists of the left and right” serves to deny the real anger of Black people which could lead to such actions. (In any case, the looting of poor people of Target is nothing compared to the looting of billions of dollars in government aid supposedly for the unemployed or small businesses but instead grabbed by big businesses)

The authorities have varied in their reactions. The Democrats have tried to emphasize their sympathy with the protesters, while calling for police- enforced nonviolence and legality. They try to get the people to “join” with the police, and direct their anger to voting for Democrats. The right, after giving a quick nod to the righteousness of the protests, focused on the violence and destruction. They denounce the Democrats as being too “weak” toward the “rioters.”

President Trump, as usual, has posed as a tough guy to cover up his cowardliness. During demonstrations at the White House, he huddled in a basement bunker. He has called for the use of the military against demonstrators, announcing the need for “dominance,” and quoted, “When the looting starts, the shooting starts.” Meanwhile he posed for a photo- op in front of a well-known Washington Episcopal church which had some fire damage; to do this he had the military clear away a crowd of peaceful protesters with tear gas. (The Episcopalian hierarchy was displeased with him.) Hundreds of military personnel have stated that they will not serve to attack their fellow citizens who are peacefully asserting their rights.

While the police have posed as being cooperative in some places, in many places they have demonstrated what the protest is all about. They have assaulted marchers, shot rubber bullets at them, thrown them to the ground, beaten them with nightsticks, driven cars into crowds, cursed and threatened them, and probably aimed deliberately to provoke them to react violently.

Meanwhile the events are being used to whip up hostility toward anarchists. The extent of right-wing violent intervention has been played down or ignored. There has long been an image of anarchists as bomb throwers, assassins, and terrorists. It is true, that more than a century ago, a few anarchists did kill a number of government leaders, businesspeople, and ordinary people who were around them. More recently the “Unabomber” (who regarded himself as an anarchist) sent mail bombs to people he did not like. Otherwise this has been uncommon for a long time.

Anarchists have a wide range of views (as do liberals, conservatives, and Marxists). A large number are absolute pacifists. U.S. anarchists often get involved in demonstrations to serve as medics and legal aides. While it is counterproductive to urge disorganized violence, anarchists are correct to oppose trust in Democratic politicians and sweet-talking police officers.

Liberals make all sorts of proposals for improving the police. They have been doing so for decades. While some reforms may be useful, they have never made a big difference and never will. This society cannot exist without police. The conflicts between rich and poor, white and Black, men and women, different sections of the corporate rich, different sections of the working class, etc., make for a constantly clashing and conflictual society, in a continual state of almost civil war. It needs a state, with bodies of armed people (military and police), to hold it together. The charge that the removal of the state and its police would create chaos is exactly backwards. It is the chaos of capitalist society which requires the state. In a cooperative and free society of anarchist-socialism, there would be no need for the police.

Rather than focusing on “improving relations with the police,” it would be better if at least some of the young militants were to link up the issue of police brutality with other issues of oppression. This includes ideas of restarting the economy under the control of workers and working-class communities of all races and nationalities. It includes taking away the wealth of the one percent and distributing it fairly among the population in useful ways. It means dealing with the plague in a safe and healthy fashion.

By themselves, these demonstrations and rebellions have a tremendous impact on society. They show the power of the people when they take to the streets in direct action. The protesters are not relying on politicians to be political for them, but take matters into their own hands. They are not waiting for months to pass for the next election, but are acting right now while the issues are hot. In general, they have not aimed at civil disobedience, but many have been willing to keep on demonstrating even after the arbitrary curfews, which they know will often result in arrests.

Our rulers are fearful of these mass actions and vacillate between trying to bring it back into the occasional electoral booths and trying to beat the oppressed back. So far neither approach has worked well for the ruling class. And for even stronger leverage, the protests need to mobilize people as workers, using their potential power at the workplace. If the workers stop working, society grinds to a halt. If they start it up again, they could do so in a new and better way. Even now, bus drivers in New York and elsewhere have refused to take police and arrestees in buses from the demonstrations—with the support of their national union. Workers should demand support for the demonstrations from the unions. The slogan of a general strike should be raised, as a few radicals have already done. (However, the police “unions” should be thrown out of the union federation as agents of repression.)

Meanwhile neighborhood and local groupings, however informal, should further organize themselves and create citywide committees. Such committees could coordinate actions, decide on programs, and raise demands on the government.

This society is in deep crisis. Its present government might qualify as a “failed state,” it is so incompetent. The corona health crisis has been handled completely ineptly. But whenever it will be brought “under control,” the economic crisis will still be here for a long time. Meanwhile the climate catastrophe and ecological cataclysm are constantly worsening, giving us only decades to bring them “under control.” Racial oppression is an integral part of an overall oppressive and exploitative capitalist system. Capitalism has got to go.

These protests are a rebellion. They are evidence that the U.S. population is not forever passive and demoralized. There is great anger and a thirst for justice and freedom. This will not lead to an immediate revolution. But it raises the eventual possibility.

← U.S. Out of the Middle East Putin Unleashes War on a Defiant Ukraine! →