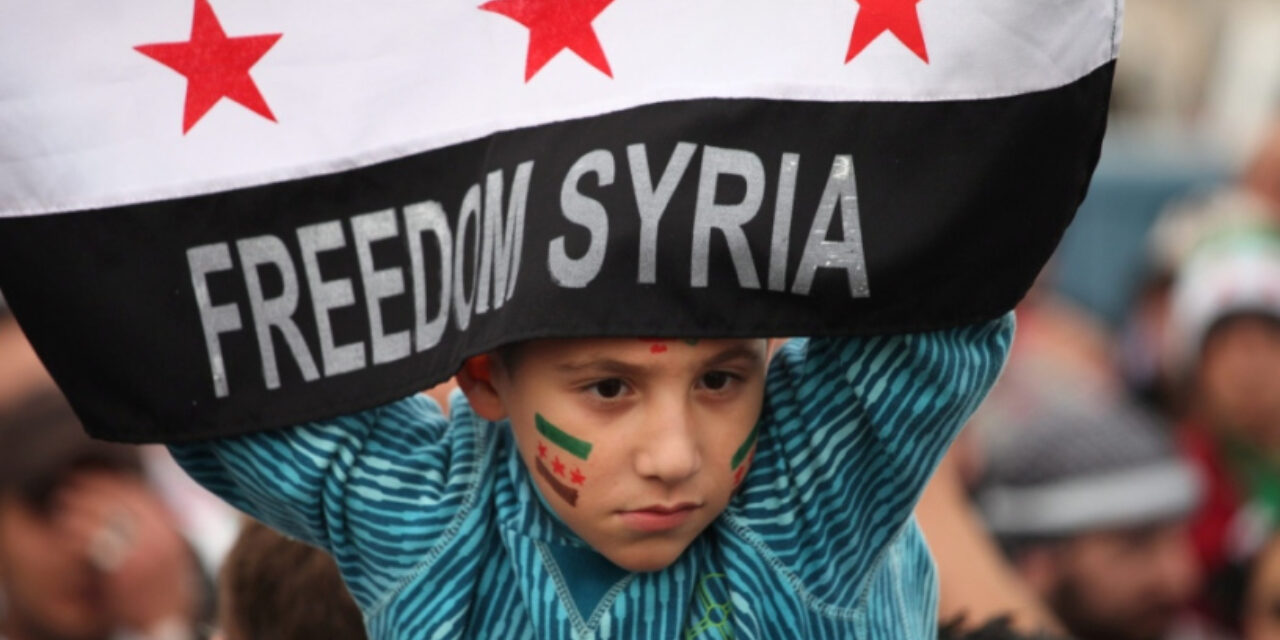 Despite 200-300,000 people killed and millions more displaced; despite whole cities bombed into ruins; and contrary to assertions in the corporate media and anarchist outlets like Crimethinc, the Syrian Revolution is still alive, though very, very weak. Among other reports, the one by Leila al-Shami recently reposted here, confirms this. What follows is a write-up of a presentation I made on the subject at the Utopian conference in July. I trust that it will provide a useful background. I don’t deal with recent events in the northern part of the country; issues in that area are covered in ‘It’s Going Down (A Rabbit Hole in Rojava)’, also on the Utopian website.

The revolution began in 2011 during the Arab Spring, after mass mobilizations had toppled the governments of Tunisia and Egypt, and almost did the same in Bahrain. Those revolts appeared as sudden events in the Western corporate media, but their roots traced back a long time. Syria’s was the same.

Those roots could go back at least to the Ottomans, but I’ll start with Hafez al-Assad, Bashar’s father, who seized power in a 1970 coup. He proceeded to build an extremely repressive state based on patronage and crony capitalism. Its pillars were the state apparatus itself; the military; merchants and other business; and the Ba’ath Party, which itself had seized power in a 1963 coup but was neutered by the Assad family.

Before Hafez, the Ba’aths, inspired by the Soviet model, had nationalized much of the economy. Afterward, however, Hafez slowly turned over sections to private interests that were closely connected to him and his family. This process greatly accelerated under son Bashar, who after succeeding his father in 2000, introduced the International Monetary Fund’s and World Bank’s neoliberal programs. The result was a vast increase in economic inequality as merchants and capitalists connected to the regime made fortunes while the living standards of ordinary Syrians stagnated. In the countryside well-connected investors, businessmen and even some of the pre-nationalization landlords took over huge swaths of the countryside to the detriment of hundreds of thousands of peasants. Between 2002 and 2008 40% of them— some 600,000 people— were forced from the land.

Adding to the peasants’ misery were the effects of global warming. Between 2007 and 2009 Syria was hit by a drought so severe that international agencies were called in to distribute food to a million starving peasants while 300,000 were driven to the cities.

During Hafez’s rule, the regime succeeded in co-opting Syria’s numerous religious minorities; in particular, the Alawis to which his own family belonged. But it also neutralized large sections of the majority Sunnis, who had dominated Syrian society before the Assads. One way the Assads did this was through a program of gradual Islamic revival; in particular, letting Islamic charities grow to fill the economic and social gaps caused by the regime’s neoliberalism.

However, one minority which Assad didn’t co-opt were the Kurds, tens of thousands of whom had been stripped of their citizenship in 1962 and were unable to regain it until after the revolution began. Nevertheless, Assad did use the Kurdistan Workers Party (PKK) as a proxy to attack Turkey, permitting the group in 1983 to establish camps on Syrian soil to fight its guerilla war over the border. This was the beginning of a long relationship between the Assad regime and the PKK.

The uprising that began in 2011 after successful revolts in Tunisia and Egypt is important to anarchists because it showed signs of genuine dual power, at least in embryonic form. (This is not to be confused with the ‘dual power’ strategy of many anarchists, which is more about building alternative institutions or ‘organizing’ community groups rather than putting forth a perspective of revolutionary democratic mass action). Indeed, the Local Coordination Committees (LCC’s) which sprang up throughout the country to organize and coordinate the struggle were originally popularized by a Syrian anarchist, Omar Aziz (murdered by the regime in 2013). Partly as a result hundreds of thousands of Syrians repeatedly took to the streets, struck, occupied and built blockades. And in a society checkerboarded with religious sects and other minorities, the demonstrators for the most part made a conscious effort to unite them all. One of the revolt’s most popular chants was, ‘One, one, one, the Syrian people are one!’

The demonstrations began with demands for police accountability and political reforms, but quickly escalated to the downfall of the regime after Assad refused to concede anything and began shooting the marchers. Thus, began the militarization of the struggle and the bloody repression that continues to this day.

However, despite defeats and defections, significant sections of Syrian society continued to support Assad. These included obviously most of the army, security services and civilian state apparatus, but also the Alawi and a large portion of the Sunni and Christian religious hierarchies, and most of the business sector.

In addition to shelling, bombing, assassinations, arrests and disappearances, the regime pursued a policy of religious division. For example, early in the revolt in a gesture badly misinterpreted by the international media, Assad announced the release of thousands of ‘political prisoners.’ However, these were not ‘normal’ oppositionists, but Islamic fundamentalists who quickly went to work attacking the secular groups in the revolt while providing cover for Assad’s story that he was defending the country against Islamist extremism.

In addition, Saudi Arabia, Qatar and Turkey aided the fundamentalists. All three states shipped in weapons, and Turkey let hundreds of veteran Islamist fighters freely cross its border with Syria. In addition, Daesh (ISIS), with a wink and nod from Assad, took over hundreds of square miles of Syrian territory. As a result, the secular revolutionaries and also the defectors who formed the Free Syrian Army (FSA) gradually lost ground to the better-equipped and better-trained sectarian extremists.

While the newly formed LCC’s and similar groups formed the grassroots civilian resistance to the regime, many of the traditional opposition parties and the Muslim Brotherhood came together in Istanbul to form the Syrian National Council (SNC) and, later, the National Coalition of Revolutionary and Opposition Forces (known as ‘the Coalition’-these were the so-called ‘moderate’ Syrians so much ballyhooed in Washington at the time). The Coalition pretended to be the legitimate opposition, but it was politically dead from the beginning. It kept its offices in Turkey away from the LCC’s and other on-the-ground organizations within Syria; and it was riven by religious, personal and other divisions fomented by forces outside Syria.

Perhaps the most influential of those outside forces was the Turkish state. It had long opposed Assad. It also had conducted decades of genocidal campaigns against the Kurds in Turkey. This ethnic oppression carried over into the Coalition. At the beginning of the uprising masses of Kurds in Syria had marched against the regime. The PKK and its affiliate, the PYD, although significant, were at best passive toward Assad. They were politically isolated. However, in one of the tragedies of the Revolution, the Arab nationalist, traditionalist and bourgeois SNC and Coalition squeezed out the Kurdish representatives (and sidelined the women and the LCC’s). This laid the tracks for the PKK/PYD to make a deal with Assad in 2012 to withdraw his troops from Kurdish areas, letting the PKK/PYD revive and begin repressing anti-Assad activists itself. Subsequently the PKK/PYD took over the entire Kurdish area, now known as Rojava, and began the ‘social experiment’ called ‘democratic confederalism’ now so highly touted by anarchists who should know better.

The Syrian Revolution has raised a number of important questions. For example, the National Coordination Body for Democratic Change, a coalition of traditional opposition parties within Syria, came together around non-violence, no foreign intervention and religious sectarianism. At the same time the SNC in Istanbul aided the FSA and was neutral toward foreign intervention. Within the LCC’s and other grassroots groups, non-violence remained an issue literally for years. Also, while the LCC’s exhibited characteristics of incipient dual power, they were never well-coordinated and their major demand was limited to a parliamentary democracy. Later, as the struggle deepened, the land question arose but only in a limited fashion.

Regarding my own views, I don’t think the Revolution had any choice except to take up arms after Assad began massacring, bombing and gassing people. I also believe that intervention by foreign states (like the U.S. or NATO countries) would have come to no good end. One only can look at what foreign intervention by Russia, Saudi Arabia, Qatar, Turkey, Iran and Israel already has done. As to the LCC’s, my view would be to fight for their political independence with a perspective of them becoming the basic bodies of a revolutionary cooperative commonwealth.

← The Tragedy and Triumph of Lester Young Report From Barcelona →