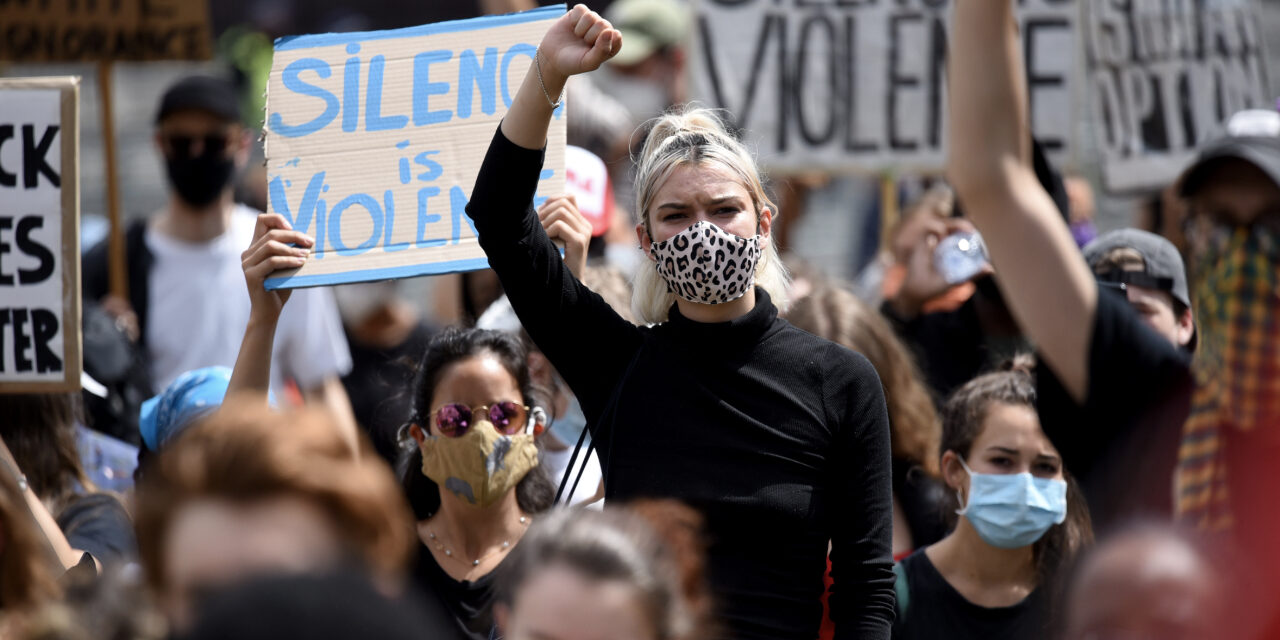 To look for Utopia means providing a vision for the future— of a world worth living in, of a life beyond what people settle for as experience clouds their hopes. It means insisting that hope is real, counting on human potential and dreams.

Utopians do not accept “what is” as “what must be.” We see potential for freedom even in the hardest of apparent reality. Within our oppressive society are forces for hope, freedom, and human solidarity, possibilities pressing toward a self-managed, cooperative commonwealth. We don’t know if these forces will win out; we see them as hopes, as moral norms by which to judge society today, as challenges to all of us to act in such a way as to realize a fully human community.

We can describe some of these possibilities: worldwide opposition to the imperialist domination of the global economy; struggles against dictatorship in China, Syria, Egypt, and Venezuela; fights for national liberation in Ukraine, Kurdistan, Palestine, and China (including those by Uighurs and by Tibetans); cultural movements for the defense and recovery of indigenous languages and histories; struggles throughout the world to guarantee women full sovereignty as a right, not a privilege, dismantling the patriarchal systems that institutionalize the domination and devaluation of women by men; changes in society’s acceptance of LGBTQ people and people with disabilities; and struggles against racism, for the rights of people of color, and for the rights of immigrants. There will— we hope— be similar utopian phases ahead in mass movements in the U.S.

But beyond these specifics, we are talking about something familiar to everyone, although difficult to get a handle on. In small ways, every day, people live by cooperation, not competition. Filling in for a co-worker, caring for an old woman upstairs, helping out at AA meetings, donating and working for disaster relief— people know how to live cooperatively on a small scale. What we don’t know, and what no one has found a blueprint for, is how to live cooperatively on a national and international scale, or even on the scale of a mass political movement. Nobody has described how the society we want will look, or how to get it, though we know what it will be: a society where people are free to be good, a society based on cooperation and peace, not dominance and aggression.

This is a good time to be publishing a journal dedicated to Utopianism, revolutionary socialism, and anarchism. Struggles of the red state teachers; activism in the Black and Latinx communities, and of women, lesbian, bisexual, gay, transgender, and queer people, indigenous people, environmentalists, and people with disabilities— these, we think, are all harbingers of another upsurge coming.

But these are perilous times as well. Destructive effects of climate change are already being felt. They will get far worse. They demonstrate capitalism’s disregard for life— human and otherwise— and for the ecosystem. It is a graphic illustration of the need to reorganize the way in which we (human beings) relate to and organize the world around us, as well as our relations with one another, with other species, and with the entire ecosystem.

The collapse of the Soviet bloc and the fact that China’s Communist political dictatorship is state-controlled capitalism (with gross inequality) have done more than just discredit authoritarian Marxism. They have also discredited, for many, the very idea of changing society fundamentally. Instead, we see many turning in desperation to the demagogues of the right, while others look to the statist reformists of the social democratic left.

Meanwhile, the fabric of the post-World War II world system, already fraying, is unraveling at its core, the U.S. and Europe. Rising anger at the gross inequality and assault on living standards of the majority has resulted in the rise of right- wing movements throughout Europe and the U.S. Racist, anti-immigrant authoritarians have ridden this anger to electoral victory in the U.S., Italy, Hungary, Austria, and Turkey, to name a few.

In the U.S. and the UK, social democrats have also gained adherents (Bernie Sanders, Elizabeth Warren, Alexandria Ocasio-Cortez in the U.S.; Jeremy Corbyn in the UK). But these “democratic socialists” and “progressives” think that capitalism can be reformed, its rough edges smoothed. Their prescription to cure the predations of neoliberal privatization is to increase the scope and authority of the state, with their ideal being something resembling Scandinavian “socialism” (contemporary Denmark; Sweden of the 1960s) and/or FDR’s New Deal. So in the U.S. the leading demand is “single payer health care”— with no discussion of how this would not be a top-down, bureaucratic monstrosity, or how it would not come at the expense of another program.

But the cure for privatization is not to increase the power and authority of the state (be it by regulation, taxation, or nationalization) but to dismantle the state (the standing army and the cops; the nightmare bureaucracies) and to reorganize society, cooperatively and democratically from the bottom up, locally based and with emphasis on mutual aid. We are confident that new mass movements from below will rise again, in a massive surge, as did Occupy in 2011. And we hope and anticipate that, like Occupy (in its initial stages, at least), these movements will reject reformism and statism.

Another highly problematic phenomenon has been the rise of Islamist/Jihadist religious fanaticism, which exploits radical hopes for escape from western domination to build mass support for a tyrannical, socially regressive, and exceptionally brutal war against both non-Muslims and the great majority of Muslims. This development is partly a response to the collapse of secular anti-imperialism in Africa, the Arab world, and Asia in the past fifty years, and partly to continuing European/North American domination of these areas, now made worse by an anti-immigrant, anti-Muslim backlash in Europe and the United States. The road forward lies in rebuilding a democratic, radical anti-imperialism, but how this may occur we don’t know.

Moreover, with a few exceptions, revolutionary anarchist and libertarian socialist groups remain small and their influence limited. Various kinds of reformism and Marxism still attract radical-minded people. Indeed, the support for Bernie Sanders in the 2016 Democratic Party primaries and the growth of the Democratic Socialists of America (DSA) since the November 2016 elections show that various strains of left statism, reformist and Marxist, still attract radically minded people. Reformism and Marxism, and their corresponding movements, accept the state, capital-labor relations, conventional technology, and political authoritarianism. Nevertheless, despite the dominance of reformists and statists in the world of the organized left, over the past two decades the influence of anarchists and libertarian socialists has clearly increased (as was seen in the Seattle protests against the World Trade Organization as well as the Occupy movement).

It is important to continue to work for freedom and to speak of utopia. This racist, sexist, and authoritarian society has not developed any new charms. It remains exploitative and unstable, threatening economic collapse and environmental destruction. It wages war around the globe, while nuclear weapons still exist and even spread. Even at its best— most stable and peaceful— it provides a way of life that should be intolerable: a life of often meaningless work and overwork; hatred and oppression within the family, violence from the authorities; the continuing risk of sudden violent death for LGBTQ people, women, and Black people; the threat of deportation of undocumented immigrants. The major reforms of the last period of social struggle, in the 1960s, while changing much, left African Americans and other Black and brown populations in the U.S. and around the world facing exclusion and daily police (state) violence, literally without effective rights to life. The videos we see every day (in which new technology makes visible what has always been going on) reveal, like sheet lightning, the reality of the system we live under. For this society, from its inception, to call itself “democracy” is a slap in the face of language.

This paradoxical situation— a society in obvious decay but without a mass movement to challenge it fundamentally— is, we hope, coming to an end. As new movements develop, liberal-reform and Marxist ideas will show new life, but so will utopian and libertarian ideas. We work with this in mind. We have to do what was not done during the last period of really radical social struggles in the 1960s and 1970s. Among other things, revolutionary anarchist and libertarian socialist theory very much needs further development, including its critique of Marxism, and its ideas about how to relate to mass struggles, democratic and socialist theory, and popular culture. And we need to reinvigorate the ideals of anarchism/libertarian socialism and the threads in today’s world that may, if we can find them and follow them, lead to a future worth dying for and living in.

Based on all of the above, we state a few basic principles:

We fight for reforms, but we do not believe that capitalism can be reformed or transformed into socialism via reformism or reliance on the state, be that reliance via nationalization, parliamentarism, a social democratic New Deal, or any such statist scheme.

We are opposed to social democracy, electoralism, and the capitalist parties. Consequently, we are categorically opposed to supporting Republican or Democratic candidates (including “insurgent” Democrats such as Sanders, Warren, and Ocasio-Cortez), and third parties.

We are not pacifists. We are internationalists who, as well, support struggles for national liberation. We oppose neoliberal globalization, but also oppose the virulent racism and scapegoating being directed at immigrants, at women, at Black and brown people, at LGBTQ people, at religious and ethnic minorities. We are for fully open borders.

We support and encourage workers to organize. Organizing may take place outside the unions, inside the unions, or both inside and outside, depending on current situations and future developments. And organizing should not be limited to workplace issues, but should embrace broader social, environmental, and community concerns as well.

We are anarchists and libertarian socialists. We seek collaboration with all who share our core values, including those who consider themselves libertarian Marxists, although our view— of which we hope to convince them— is that Marx, far from being a libertarian, was an authoritarian centralist and statist.

This future, we state clearly, is an ideal, not a certainty. The lure of Marxism, for many, has been its promise that a new world is objectively determined and inevitable. This idea is not only wrong, it is elitist and brutal. If the new society is inevitable, then those who are for it will feel free to shoot or imprison everyone who stands in their way. That is the key to Marxism’s development from utopia to dictatorship, which everyone except Marxists is aware of. Nor do we believe in an inevitable collapse of the present system— capitalism may be able to continue to push its way from crisis to crisis at the usual cost in broken lives and destroyed hopes.

We fight all oppression under capitalism and urge all oppressed people to work in a common struggle to end their own oppression and that of their sisters and brothers.

We believe people have to make ethical choices about whether to accept life as it is or to struggle for a new society, and then about whether the society they are for will be democratic or authoritarian. The only key to the future is a moral determination to get there, a dream of a world in which those who were obscure to one another will one day walk together. We do not know where this key may be found, but we know the only way to find it is to search for it.

That is who we are.